A sharp tapping noise draws our attention to the worn edges at the base of a wooden check-in desk, as an orange claw peeks precariously out over the tiled floor.  Perplexed, we nearly end up on top of our suitcases as the largest crab we have ever seen proceeds to scuttle sideways across the lobby, drawing no undue attention from anyone!  Welcome to the Hotel Cubanacan Brisas Trinidad Del Mar where our hard-shelled friends migrate on-mass on a yearly basis.  The hotel has a worn and basic, but friendly feel of an all-inclusive hotel.  Typically opting for boutique and unusual holiday dwellings, it was not often that we found ourselves in an all-inclusive set-up, but the travel agent had booked it and we were game.  The hotel continued to deliver many more unique experiences than just the crabby hosts. 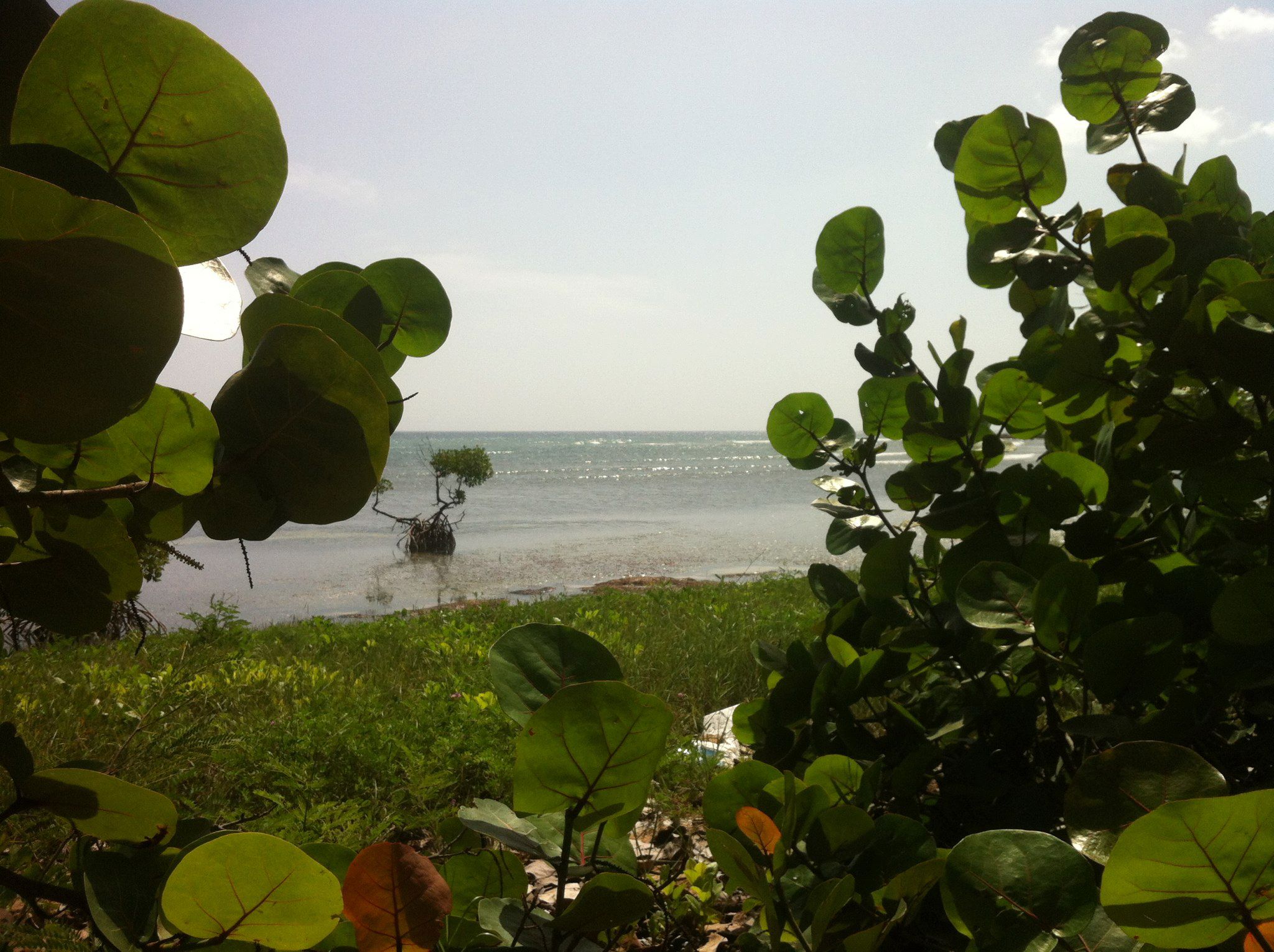 Living hundreds of miles away from my Mother and with a passion for travel, we decided many moons ago, that each year we would pick a new destination to explore.  So far our voyages have traversed 3 continents and Cuba was a must-see before the embargos were lifted and Americanization flooded into the country.  We were assured that the American industry giants had containers parked at ports waiting to get first dibs as soon as sanctions were relaxed.  In hindsight, post-sanction easing, the economy still has a long way to go.   Breaking news though, it was announced yesterday that DJ group Major Lazer will be the first large US act to play in CUBA since Obama’s thawing of US-Cuban diplomatic relations, outside the American embassy of all places.

If you haven’t been to Cuba, go.  This Caribbean archipelago still has that yesteryear-colonial feel, frozen in time, but bursting with an exciting history fronted by handsome rebels and a passionate culture.  We spent 3 weeks traversing from the far West of the island in the provincial naturally luscious settlement of Soroa, apparently nicknamed the ‘Rainbow of Cuba’, eastward to the cultural melee of Havana.  You can read about each of these unique places in our other blog posts.  Cuba has so much to offer, there is too much to fit the whole trip in one post!

Trinidad is a colonial town in the central province of Sancti Spiritus.  Less famous than the capital Havana, Trinidad and the nearby Valle de los Indgenios have been UNESCO World Heritage sites since 1988.  Founded by Diego Velazques de Cuellar, it is one of the best-preserved examples of a sugar trade town and you can feel the history exuding from the streets as you explore the town.  Situated a short distance outside Trinidad, we would take a 15-minute bus journey, accompanied by the driver’s witch on a broomstick hanging from the central mirror.  Cubans are friendly people and we enjoyed a jovial laugh with the driver as he explained that it was a gift from his son to keep him safe. 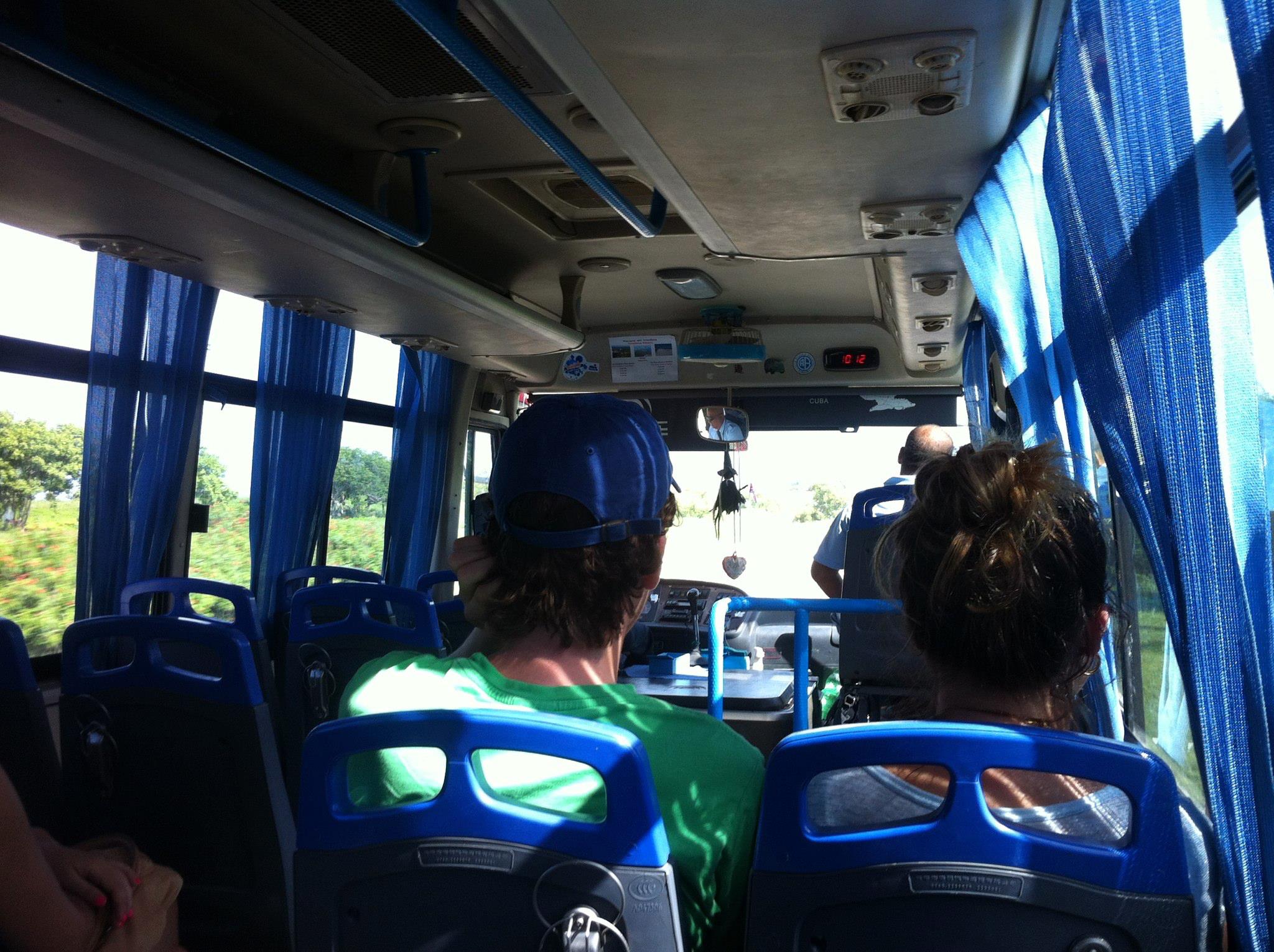 The town is picturesque with wide streets and architecture reminiscent of the Arab majlis and wind towers.  Having evolved under Spanish rule, this is not unexpected and greatly enjoyable to spend a balmy afternoon gently perambulating the many town squares, imagining the rich stories the cobbles could tell.  Visions abound of an era of horse-drawn carriages and grand 19th century Spanish mansions, a splendor bankrolled by an extensive sugar trade.  Nowadays, the main industries are tobacco processing and tourism from Western nations. 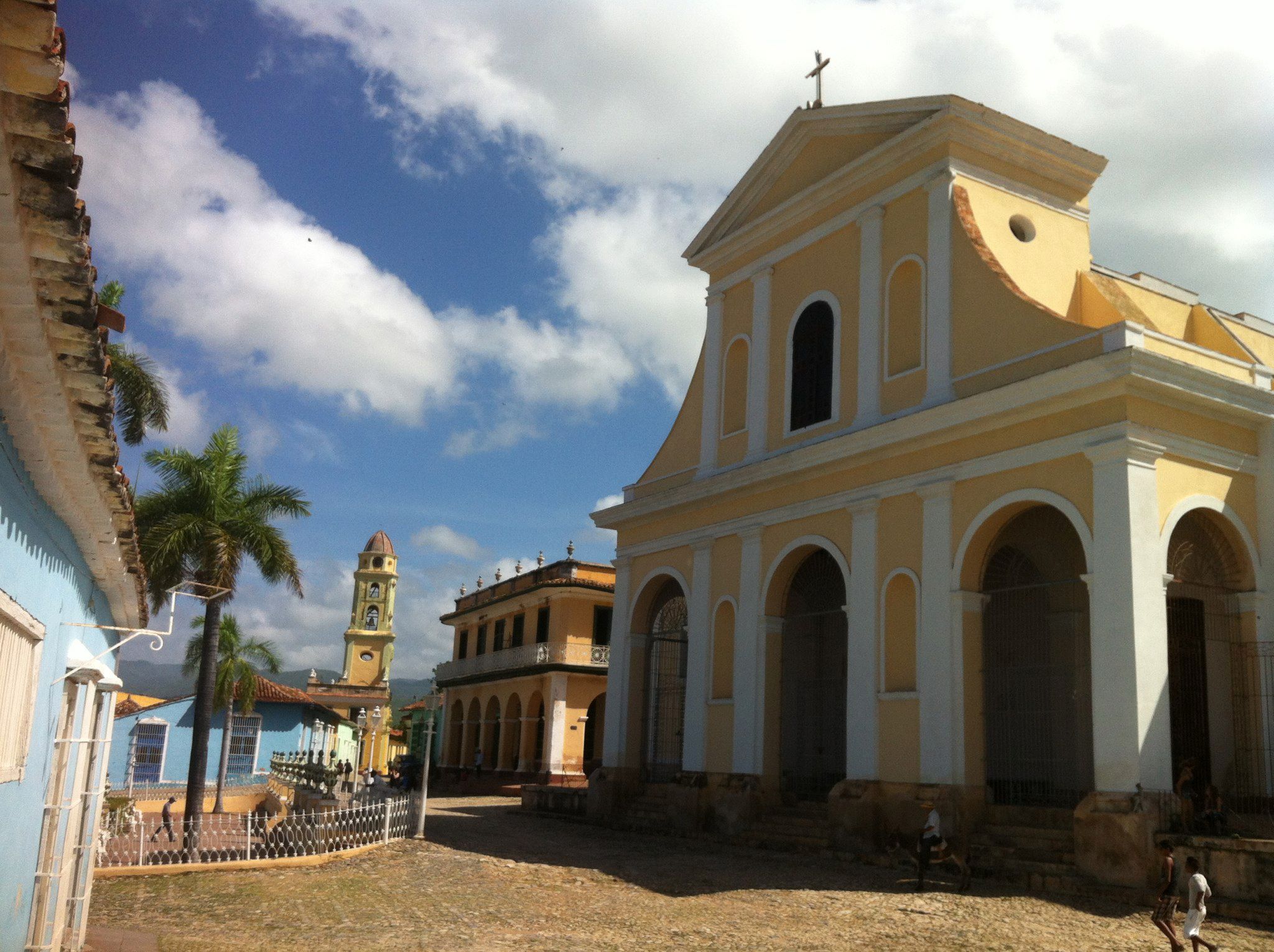 Whilst many would admit Cuba to be a cultural cliché, it has such a rich and warm culture that the stereotypes are wonderfully welcome.  Hiding from the afternoon sun, we sneak off the street into a cool courtyard and a Trinidad institution, against a background of live congas, the Chanchanchara tavern.  Chanchanchara is a fiery Cuban concoction of rum, lime, honey and soda on crushed ice served in a little clay pot.  A forerunner of the Daiquiri, it was originally drunk by Cuban revolutionaries, but without the ice.  Yellowing squares of paper flutter from a notice board advertising musicians scheduled to be playing, speaking with the waiter though it is not unusual for impromptu jam sessions to occur. 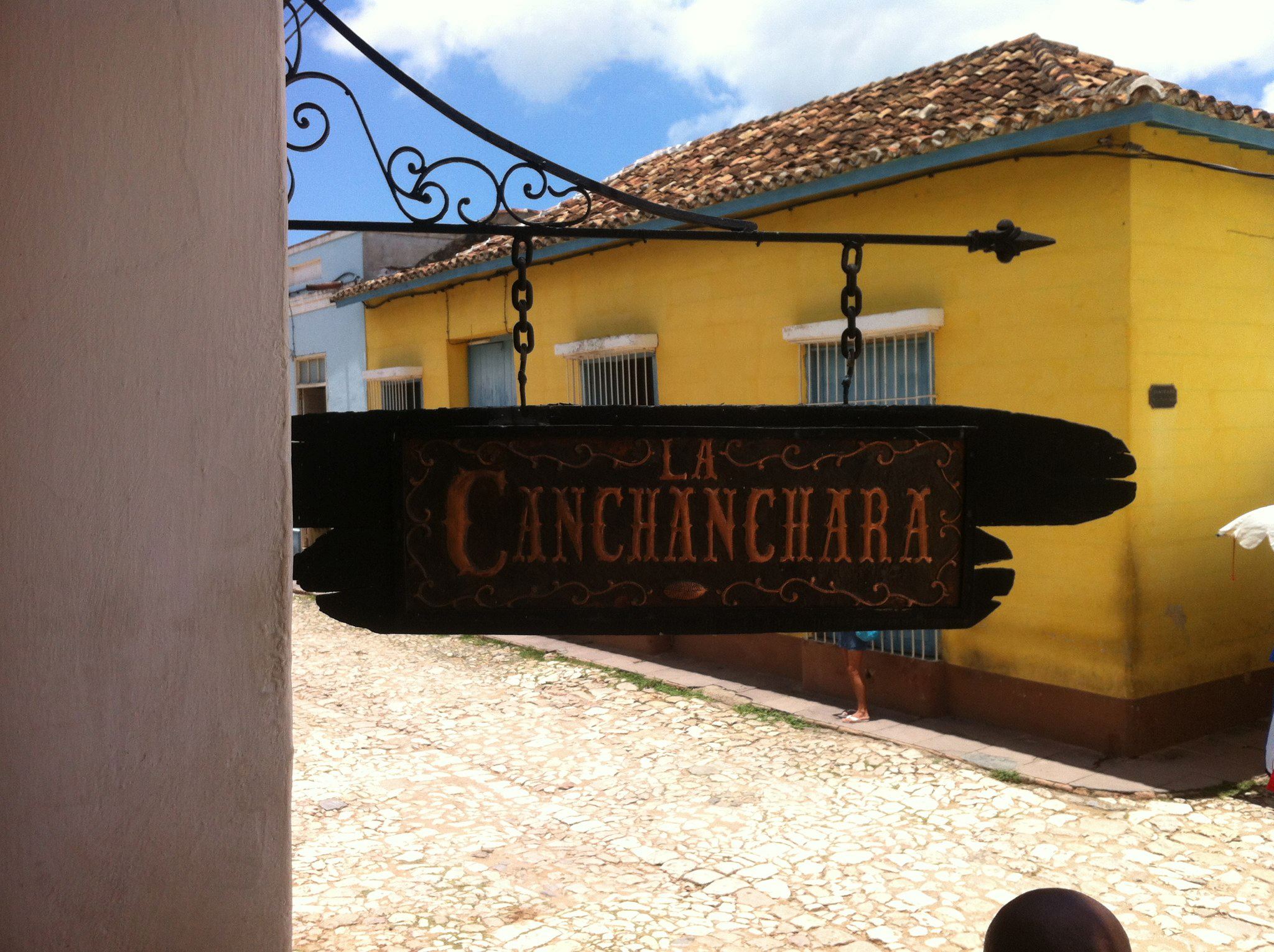 Cuba has rhythm running through its veins, it’s infectious.  We would be serenaded each night at dinner by a guitar-strumming lanky ombre, accompanied by his cheerful portly partner on maracas.  Meals were always a staple pairing of basic rice and meat dishes, washed down with a local Bucanero lager.    We enjoyed interacting with the warm Cuban people, but you soon get a feel for how many restrictions they face.  Our beautiful guest relationship manager was a trained nurse, but there was no need for nurses so she was seconded to hospitality.  Tiredness filled her demeanor; she knew this was the only way she could provide for her family, but that Cuban energy was striking in her eyes.  She spoke of where she would go if she could.

We were only there a short time and whilst tourists have access to many amenities that locals could only dream of, like the Internet, we soon had a taste of how isolating the infrastructure can be.  I attempted to log onto the Internet once, through a yellowing 90’s computer monitor and a dial-up modem.  There was a sign stuck prominently on the glass window, ‘FOR TOURISTS ONLY’.  30 minutes and $10 later, I was still no closer to accessing my Gmail account.  I resolved to just enjoy the imposed tech-break and return to the beach with a good book.

I was in need of some downtime and could indulge my passion for morning runs, accompanied by the hotel dog, my new comrade nick-named Chachi.  We would chase the sunrise, pounding the crab-splattered road.

You cannot imagine the sheer number of crabs that infiltrate Cuba’s coastal areas in the migration period, a point that often puts weak stomached tourists off visiting at certain times of the year.  Even I was taken aback to stray into the bathroom one morning to come toe to claw with one of our crustacean chums who had snuck in overnight.

Life was definitively slow paced around Trinidad and I would definitely recommend spending at least a day there.  You uncover a magic that helps you to understand many aspects of Cuban culture and the historic importance of this sleepy colonial town that befits it as a UNESCO World Heritage site.